Mark C. Molumphy, a partner at Cotchett, Pitre & McCarthy, LLP, is a native of the Bay Area, born in San Mateo, California.

Mark has served as lead trial counsel in many of America’s most prominent cases and, during his extensive career, recovered over one billion dollars for his clients.  Today, Mark is considered one the nation’s most accomplished trial attorneys in securities, corporate governance, and data security and privacy.

In 2020, Mark’s string of historic results earned him recognition on the Daily Journal’s distinguished list of the Top 100 Attorneys in California. During 2021, Molumphy has been included in Super Lawyer’s list of the Top 100 Lawyers in Northern California, America’s Top 100 High Stakes Litigators, The National Trial Lawyers Top 100, and Irish Legal 100.  Molumphy was also recently named to Lawdragon’s 500 Leading Plaintiff Financial Lawyers for 2021.

Mark currently serves as co-lead counsel in several noteworthy class actions, litigating issues of first impression relating to newly-enacted data privacy and security statutes.  In the Apple Device Performance Litigation, after years of litigation, Mark successfully negotiated a $310 million settlement – the largest all-cash recovery in a computer intrusion case in history – on behalf of a class of approximately 100 million iPhone users.  The district court granted final approval of the historic settlement in March 2021.

Mark also serves as co-lead Counsel in In re Zoom Video Communications, Inc. Privacy Litigation, representing a nationwide class of over 100 million Zoom users, alleging that Zoom failed to encrypt Zoom meetings, improperly shared user information, and left many exposed to “Zoombombing” by unauthorized third parties in violation of privacy and unfair competition laws. In August 2021, the parties announced a proposed settlement, subject to court approval, that will require Zoom to pay $85 million in cash compensation and implement comprehensive reforms to its business.

Mark has also led some of the largest shareholder derivative actions in the nation, and currently serves as co-lead counsel for the Trustee of the Fire Victims Trust, assigned PG&E’s rights to pursue action against its own officers and directors relating to the 2017 North Bay Fires and 2018 Camp Fire. Mark previously worked on the PG&E shareholder derivative action arising from the San Bruno gas pipeline explosion, resulting in a $90 million recovery, one of the largest derivative Settlements in U.S. history, as well as extensive reforms to PG&E’s underground gas transmission systems to protect customer safety.

Mark was honored as a finalist for the Consumer Attorneys of California Attorney of the Year, based on his work as lead counsel for a nationwide class of investors in Medical Capital, a medical receivable company which operated a massive Ponzi scheme that targeted elderly investors.  After convincing the federal court to reject a paltry settlement negotiated by the SEC, Mark obtained $173 million in settlements on the eve of trial, which remains the largest Ponzi scheme recovery in California history.

Over almost three decades of practice, Mark’s work has resulted in the recovery of hundreds of millions of dollars and the implementation of novel governance reforms for public and private companies alike, as well as their shareholders.

Mark is active in pro bono work and community affairs. He was a long time director and currently serves as a volunteer for the Legal Aid Society of San Mateo County, which provides free legal services to low-income children, families and seniors. He also has been appointed counsel by the Federal Court as part of the court's pro bono program.  Mark currently serves as a volunteer coach for Special Olympics, and a member of the Board of Bay Scholars, which provides financial and personal support to low-income Bay Area students, access to private college prep education, and assistance in enrolling in college.

Mark was also honored with the "Angel Award" by the Parca Auxiliary, a private nonprofit organization that 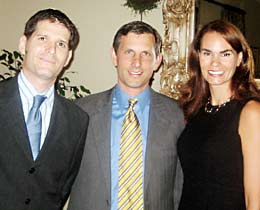 Mark remains very active in local county and federal bar associations. He was selected by the San Mateo County Superior Court to serve on Court’s complex court committee which helped open a new complex courthouse and draft initial rules and forms used in the County’s complex department. He is also a lifetime member of the San Mateo County Bar Association and past President of both the County Bar’s Barrister’s Committee and Business Litigation Committee. He is currently on the Board of Governors of the Association of Business Trial Lawyers. He is also an active member of the Northern District of California’s Chapter of the Federal Bar Association, and the national association’s Access to Justice Task Force, which endeavors to ensure equal and fair access to the legal system.

Consumer Attorneys of California Attorney of the Year Finalist (2014)