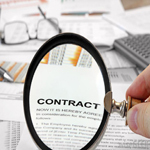 In a recent op/ed in Salon, labor and consumer organizations teamed up to criticize the vast impact of “forced arbitration” clauses in consumer and employment contracts, and to call on Congress to act on behalf of the great majority of its constituents and ban the practice.

In the November 7th piece, David Seligman of the National Consumer Law Center and Nicholas Clark of the United Food & Commercial Workers International Union denounced the use of forced arbitration provisions in contracts. Companies use forced arbitration clauses in dense, legalistic adhesion contracts to force employees and consumers to give up their right to sue when they are harmed by an employer or a company from which they have purchased goods or services. Most consumers and employees are unaware of these provisions when they sign the contracts, and those who are aware frequently have no true choice in the matter, as competing products and employers are increasingly imposing the same restrictions on their customers and employees.

Under forced arbitration contracts—which Seligman and Clark characterize as the modern-day iteration of so-called “yellow-dog contracts” used to undermine unionization efforts a century ago—harmed parties are denied the ability to sue. Instead, disputes are channeled into private arbitration, where decisions are often private and not appealable, and well-paid arbitrators have a vested interest in siding with defendant corporations in order to ensure repeat business. (Allegedly harmed consumers and workers are much less likely to appear before the same arbitrator multiple times than are corporate defendants.) Finally, the complainant is typically much less familiar with the arbitration process, and thus at a disadvantage compared to the accused company; this disparity conflicts with the core design of American arbitration, which was originally embraced as a way to quickly resolve trade disputes between equally powerful business interests.

The authors of the Salon article praised the Equal Employment Opportunity Commission for suing a conglomerate of casual-dining chains (including Chevy’s, Panera Bread and Applebee’s) for forcing employees to agree to forced arbitration as a condition of securing work. Just as with the yellow-dog contracts a century ago, these clauses represent a Hobson’s Choice: as Seligman and Clark note, the choice then, as now, “wasn’t whether or not to waive your rights, but whether you wanted a job—and that wasn’t much of a choice at all.” Contrary to a basic requirement of contract formation, these contracts are “not the result of free and equal bargaining between workers and their employers.” (Seligman and Clark do note that forced arbitration generally harms organized workers less than non-union employees, as union representatives have successfully harnessed the power of collective bargaining to fend off efforts to include such clauses in their members’ employment contracts.) Moreover, today’s version of the yellow-dog contract is arguably more insidious than the original, as corporate defendants who prevail in arbitration proceedings—and they generally do—may attempt to collect attorneys’ fees and costs from the complaining consumer or employee that can reach six figures.

A century ago, the authors note, Congress responded by passing the Norris-LaGuardia Act to “preserve[] workers’ dignity and restore[] [their] freedom to contract.” Today, in the face of congressional stagnation, the executive branch has stepped in, with the president and executive agencies curtailing the spread of forced arbitration in staggered and piecemeal fashion. Congress can, and should, act to uniformly ban the practice. After all, as Seligman and Clark write, the loss of access to a court of one’s peers should not be “the price of being a consumer or non-union worker in 21st century America.”