On May 24, 2022, CPM and its co-counsel filed a class action in the United States District Court, Northern District of California, against various defendants for fraudulently concealing defective airbag inflators installed in approximately 50 million vehicles in the United States. The defective inflators use ammonium nitrate in its propellants due to its cost savings. Ammonium nitrate, commonly used as a fertilizer, is well known for its use in making cheap explosives. Ammonium nitrate is also well-known in the airbag industry as a dangerous propellant chemical that can overpressurize during airbag deployment, sometimes resulting in violent explosions of the metal inflator canister, which expels shrapnel into the occupant compartment. The defendants are airbag inflator manufacturer, ARC Automotive, Inc.; automobile manufacturers, Audi, Ford, GM, and Volkswagen; and airbag manufacturers, Joyson Safety Systems and Toyoda Gosei. Plaintiffs are seeking economic losses for their vehicles containing defective airbag inflators, among other relief. 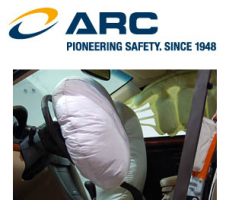