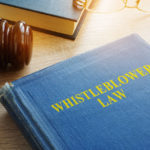 “I told my supervisor that I was concerned the company was engaged in illegal conduct and that I would not be part of it. They fired me the next week.”

“My company is ripping off the government, and I want to report it, but don’t want to lose my job.”

These issues face whistleblowers all too often. Thankfully, strong laws have been put into place to discourage retaliation against whistleblowers.

In California, for example, Labor Code section 1102.5 broadly protects employees who attempt to report misconduct from retaliation. It provides, in relevant part:

Labor Code section 1102.5 also prohibits employer from firing or retaliating against employees for refusing to help with illegal activity. It states:

“(c) An employer, or any person acting on behalf of the employer, shall not retaliate against an employee for refusing to participate in an activity that would result in a violation of state or federal statute, or a violation of or noncompliance with a local, state, or federal rule or regulation.”

If an employer violates section 1102.5, they can be sued for money damages caused by the retaliation (lost income, primarily), and for injunctive relief (for example, forcing the employer to reinstate the employee).

For example, the federal False Claims Act prohibits retaliation against an employee who does anything “in furtherance of” a False Claims Act case, or an employee to takes “efforts to stop” fraud against the government. 31 U.S.C. § 3729(h). An employer who violates these provisions can be sued for reinstatement, 2 times lost wages, interest, and other monetary damages.

Many of the state versions of the False Claims Act contain identical or similar protections.

As these examples show, lawmakers have recognized the risk that whistleblowers take, and enacted relatively powerful laws to protect them. Despite these laws, of course, unscrupulous companies will sometimes still punish whistleblowers—and intimidate others into keeping quite—by terminating, demoting, or generally making life difficult for employees who speak out. Standing up to fraud, however, is always the right thing to do. And the government has set up incentives for doing so, as we will explore starting in Part 3 of this series.

This multi-part series will focus on these two legal aspects of whistleblowing, and will provide a general overview of the area for those who think they may have fraud to uncover. These areas of law are, of course, highly complicated, and this series is not designed to provide legal advice of any kind. If you have questions about your rights, obligations, or potential legal claims, you should contact an attorney, and do so as promptly as possible, as there may be statutes of limitation or other deadlines that could impact your ability to bring a claim.