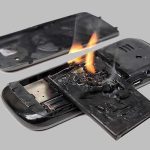 What passengers don’t know – but the airline industry does—is that the danger of fires on board planes caused by lithium ion batteries is far from over with the recall of more than 95% of the Samsung Galaxy Note 7 smartphones.

This past week the Flight Safety Foundation (“FSF”) issued a press release regarding the unique problems now being caused by the partial ban on laptops and other large devices on certain flights.  The FSF’s April 7, 2017 press release explains the issue as follows:

Recent decisions to ban personal electronic devices (PEDs) larger than a cell phone or smart phone in the passenger cabins of select international commercial flights introduce another risk by requiring these devices to be transported in the cargo hold in checked baggage.

While current International Air Transport Association (IATA) guidance says that the lithium batteries contained in these devices may be transported in checked bags under certain conditions, the new requirement likely will significantly increase the number of PEDs carried in cargo holds on the affected flights.

The concern of the international aviation community is that there have been occasions when the lithium batteries in PEDs have suffered thermal runaway and caught fire. To mitigate this risk, cabin crew have been trained in how to manage these situations. With the transport of PEDs on certain flights now restricted to the cargo hold, along with other potentially flammable items within checked-in baggage, a known and managed risk has effectively been transferred to another part of the aircraft where, should thermal runaway occur, it is rendered inaccessible to cabin crew.

The risk of a thermal runaway event and fire on commercial airliners is terribly real.  According to Bloomberg coverage, as of April 7, 2017 the FAA tracked 31 cases last year of lithium ion batteries either catching fire or smoldering on flights—and three cargo aircraft were destroyed by fires tied to the batteries—in two of the three incidents there were fatalities.  (See, https://www.bloomberg.com/news/articles/2017-04-07/laptop-ban-spurred-by-terror-concern-raises-warning-of-fire-risk).

Cotchett, Pitre & McCarthy, LLP is currently litigating a class action against Samsung over allegations that the “S6, S6 Edge, S6 Edge+, S6 Active, S7, S7 Edge, S7 Active, and Note5…all pose a risk of overheating, fire and explosion as they were designed, engineered, developed, manufactured, produced and/or assembled in a substantially similar manner to the Note7.”  To date Samsung has refused to recall these phones.  Here is a link to the complaint for more information.

CPM has a long tradition of fighting on behalf of consumers across the Country.  If you have experienced a defective lithium ion battery powered device and would like to have the case evaluated you can contact our firm at (650) 697-6000 or you can contact us using this link.