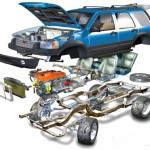 The cases arises out of a long-running and secret conspiracy by which the defendants conspired to raise the prices that they charged automakers for these parts that they charged to automakers like Toyota, Nissan, Honda, and Subaru.  The parts include air bags, seat belts, alternators, starters, and others. The defendants conspired to raise these prices even more, making Americans pay more for their cars. The plaintiffs allege that these costs were then passed on to the ultimate customer, American consumers who purchased new cars.  The conspiracy spanned more than a decade, and involved illegal conduct throughout the world.

Steven N. Williams of Cotchett, Pitre & McCarthy, LLP is Co-Lead Counsel for the plaintiffs.  Along with his Co-Leads, Marc Seltzer of Susman Godfrey L.L.P. and Hollis Salzman of Robins Kaplan LLP, Mr. Williams represents more than 50 individuals who purchased or leased new automobiles containing the automotive parts at issue in the litigation.  “This has been a very difficult case involving clandestine conduct and destruction of evidence.  It is not easy to put the pieces of the puzzle together to prove the harm to American consumers.  We are gratified with the recovery to date for Americans, and we will keep working hard to provide further compensation for the victims of this scheme.”