Lawyers Can Help The Plight Of The Middle Class By Supporting The Labor Movement
February 19, 2015 By Adam J. Zapala 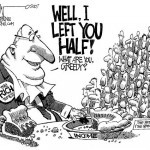 Mr. Kristof has acknowledged what many of us have known for a long time: that increasing economic inequality and persistent wage stagnation are due, in large part, to the decline in private sector union membership and power.  One study cited in the article suggests that one-fifth of the increase in economic inequality amongst males in the last few decades is directly attributable to the decline in union power.  Just as there have been excesses, greed and corruption in corporate America, so too in the union ranks.  Yet no commentator (or at least a widely published one) has been arguing that corporations should be abolished because of a few bad apples.  As the article discusses, “[a]ll the focus on labor’s flaws can distract us from the bigger picture.  For generations now the labor movement has stood as the most prominent and effective voice for economic justice.” It is time for us to accept that broadly shared prosperity will only occur with thriving unions and an expansive middle-class.

What role can lawyers play in helping to stem the tide of income inequality and increase economic justice in our society?  We can support unions; represent employees in workplace disputes, wage & hour and retaliation claims; represent workers who have been injured on the job in tort actions; and ensure that union pension and health & welfare funds overcharged through market manipulation, antitrust violations and outright fraud recover money that rightly belongs to their hard-working members and retirees.

The lawyers at CPM are committed to protecting all of these rights and the important work of the Labor Movement, which in turn has helped create and support the American middle-class – the largest driver of broadly shared prosperity in the history of the world.