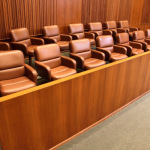 CPM attorneys Justin Berger and Eric Buescher completed a jury trial on August 5, 2015, winning a unanimous verdict awarding damages of half a million dollars on behalf of a local small business owner in a hotly disputed breach of contract case.  The lawsuit centered around a lease agreement for an advertising billboard owned by Defendant Ad-Way Signs that is located on the plaintiff’s property.  The plaintiff, CPM’s client, alleged that Ad-Way had failed to pay full rent according to the lease between the parties, believing that Ad-Way was delaying and underpaying rent in an attempt to leverage the small business owner into entering into long term lease that was more beneficial to Ad-Way.  CPM’s client never budged, relying on the legal protections provided to commercial landlords by Civil Code sections 827 and 1945 to prevail.  CPM often represents small business owners who are victimized by greed.

Mr. Buescher and Mr. Berger argued California Civil Code section 827(a) allowed their client to increase the rent and change the terms of the lease because the lease was a month-to-month agreement.  The Defendant had claimed that the lease was based upon an agreement from the 1980s that automatically renewed for successive fifteen year periods.  CPM proved that the original lease did not contain an agreement between the parties on the future rent for the renewal periods, as is required by California law.  Instead, CPM proved the prior lease was an illusory “agreement to agree in the future,” which was unenforceable, and which converted to a month-to-month tenancy under Civil Code section 1945 upon the expiration of the time period for which the parties had actually agreed to an amount of rent.

In a commercial lease that has expired and converted to a month-to-month tenancy, Civil Code section 827(a) allows the landlord to change the “terms, rents and conditions,” by providing at least 30 days’ notice to the tenant.  Such a notice provides the tenant with a choice: either stay and accept the new terms, or leave and cease using the landlord’s property.  By proving the agreement did not automatically renew, but instead was month-to-month, and that their client had followed the requirements of Civil Code section 827, CPM was able to prove the billboard owner breached the lease agreement by underpaying the rent owed.  As a result, the jury awarded over $380,000 in unpaid rent, including percentage rent and late fees, on Plaintiff’s breach of contract claim.

CPM also prevailed on the issue of whether the tenant was required to act in good faith to generate revenue due to the existence of a percentage rent clause in the Notices to Increase Rent.  The lease agreements sent under Civil Code 827 required Ad-Way to pay a portion of the advertising revenue generated from use of the billboard.  Because Ad-Way had elected to only generate revenue from one of the two faces of the billboard, the jury also awarded over $60,000 in damages arising from a breach of the covenant of good faith and fair dealing.  The damages awarded by the jury did not include prejudgment interest – which can be recovered in a breach of contract litigation under Code of Civil Procedure sections 3287 and 3289.

The trial lasted two weeks, including examination of two experts on the billboard industry.  The case was tried in Santa Clara County Superior Court, Case No. 112CV226964, before the Hon. Socrates Peter Manoukian.