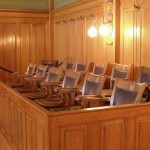 Save Our Juries launched in July 2014, becoming ABOTA's first public awareness campaign. Its mission is to "uphold the jury system provided by the Seventh Amendment to the U.S. Constitution by educating the American public about the current issues, the history and the value of the right to trial by jury." In 1958, my father, ABOTA's first National President, built ABOTA on this one mission - to preserve our civil justice system. It's vital that we always use his founding purpose as the anchor of this organization.

The SOJ team consists of the Save Our Juries Committee, as well as Rob Feldman, a phenomenal videographer and producer; Jenith Damasco, a social media expert; and Newsmaker Group, a veteran public relations team.

We are proud to call businessman Mark Cuban, U.S. Sen. Sheldon Whitehouse and former U.S. Sen. Fred Thompson the official SOJ spokespeople. Each spokesperson has filmed multiple public service announcements for our cause, and each is a valued partner in our efforts. Together we are elevating SOJ to the status of thought leaders in vital conversations about the state of our civil justice system.

ABOTA is wasting no time in gearing up for 2015. This January will mark the re-launch of Save Our Juries with the official release of our new public service announcements from Senator Whitehouse, Senator Thompson and Mr. Cuban. Additional spokespeople will be welcomed to the SOJ team in the near future, and we expect SOJ's social media and web presence to continue to grow and attract an even larger audience.

TO LEARN MORE ABOUT THE CAMPAIGN, PLEASE CLICK HERE.