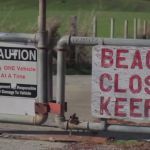 The owner of the property adjacent to Martin’s Beach has been ordered to immediately reopen public access to the beach. Judge Barbara Mallach of the San Mateo County Superior Court issued a final order today directing Vinod Khosla to open the gate blocking access to the way it was when he purchased the property.

The court found that the owner’s “desire to change the public’s access to and use of the water, beach and coast at Martins Beach constitutes development under the California Coastal Act,” and that denying access to the beach “without a Coastal Development Permit constitutes a violation of the California Coastal Act.” The court ruled that the defendants had changed the public’s access to the beach by closing and locking the gate across Martin’s Beach Road, changing a billboard announcing the beach’s presence along Highway 1, adding signs to the gate, and hiring security guards to deter the public from reaching the coast. Judge Mallach held that all of those actions constituted “development” and were thus completed illegally in violation of the Coastal Act.

Joe Cotchett and Eric Buescher, on behalf of Surfrider Foundation, battled against Khosla for the past two years. The case’s trial began in May of this year and concluded in July. In response to Judge Mallach’s final order today, Cotchett said that “it has been a long struggle, but the public access has been preserved thanks to our judicial system.”