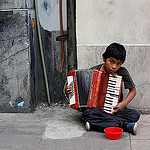 Due to rampant drug and gang violence in Central America—particularly in El Salvador, Guatemala and Honduras—there has been a huge influx or “surge” of unaccompanied minors immigrating to the United States.

When these children are detained at the U.S.-Mexico border, they are processed by U.S. Customs and Border Protection, the largest law enforcement agency within the U.S. Department of Homeland Security. From there, the children are transported to shelters overseen by the U.S. Department of Health and Human Services. In instances where the minors can show that they have a relative or adult guardian in the United States, they are sent to live with that adult and given a notice to appear in immigration court. An immigration judge subsequently decides whether the involved child should remain in the United States or be transported back to his or her country of origin. This past summer, the Obama administration ordered that unaccompanied minors’ cases receive priority over other cases pending before immigration courts. This track of expedited deportation proceedings is referred to colloquially as the “rocket docket.”

Nearly 60,000 unaccompanied children arrived at the U.S.-Mexico border in the last year. The majority of these children are eligible for asylum, a form of immigration relief available to individuals who will face persecution if they are forced to return to their home country. However, many of these children do not have attorneys. This distinction is critical because studies have shown that when an unaccompanied minor is represented by an attorney, the child is allowed to remain in the United States in almost half of the cases. Children who do not have an attorney representing them at proceedings, on the other hand, are ordered deported more than 75 percent of the time.

The Obama administration has responded to this lack of legal representation for unaccompanied children by allocating $4 million to fund legal aid for them. Moreover, San Francisco’s Board of Supervisors voted unanimously in September to draw $2.1 million over the next two years from a city reserve to provide lawyers to undocumented youth who are now residing in San Francisco as they await immigration proceedings.

CPM has pledged to take an active role in helping these children. Recently, CPM principals Camilo Artiga-Purcell and Ryon Nixon have taken unaccompanied minor cases on a pro bono basis in a partnership with the San Francisco-based Central American Resource Center, or “CARECEN.” CARECEN provides vital direct services and engages in community development and advocacy to help create a vibrant and thriving Latino immigrant community in San Francisco, the Bay Area, and beyond. Founded in 1986 by Salvadoran political exiles and refugees, CARECEN serves more than 10,000 people each year.